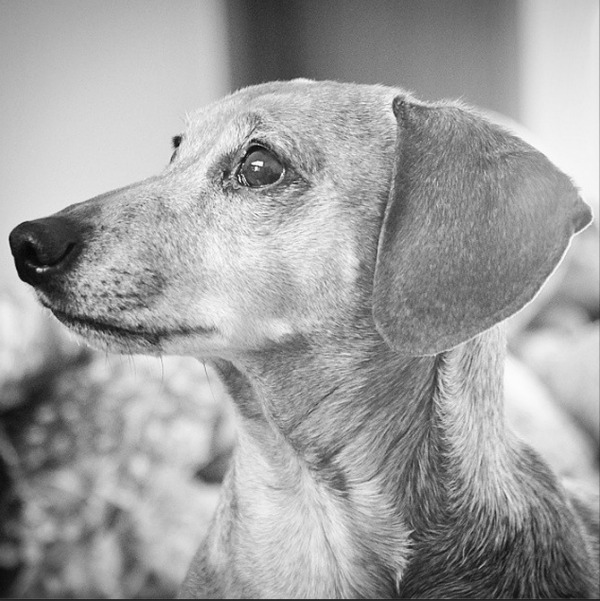 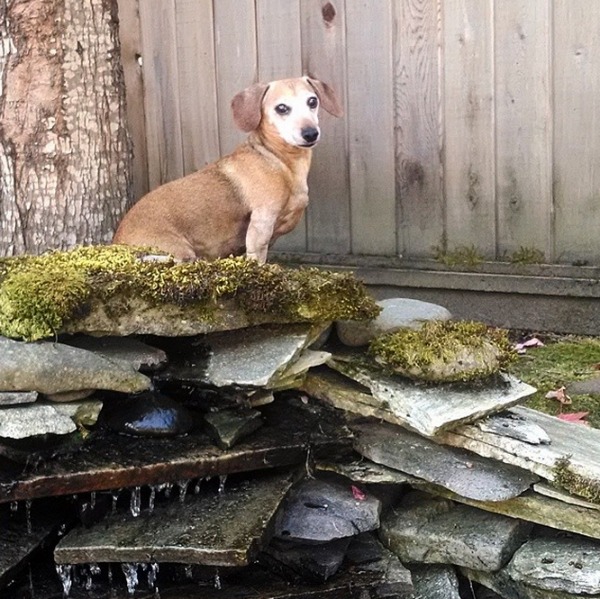 When we found out Basil was sick, I knew then I did not want him to suffer at all.

I wanted him to be happy and comfortable for the rest of his days. We also knew that our time with Basil could be short.

It was. Way too short. 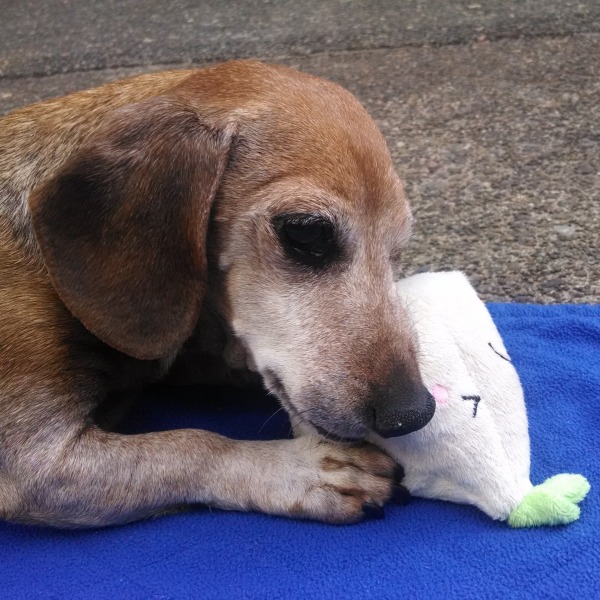 Our wonderful vet gave us a referral for a wonderful doctor who makes house calls. We set an appointment, and we celebrated Basil. He had a grilled burger for breakfast, we set out pillows and blankets, and we sat outside in the fresh morning sunshine. Basil played with a squeaky – a stuffed garlic. 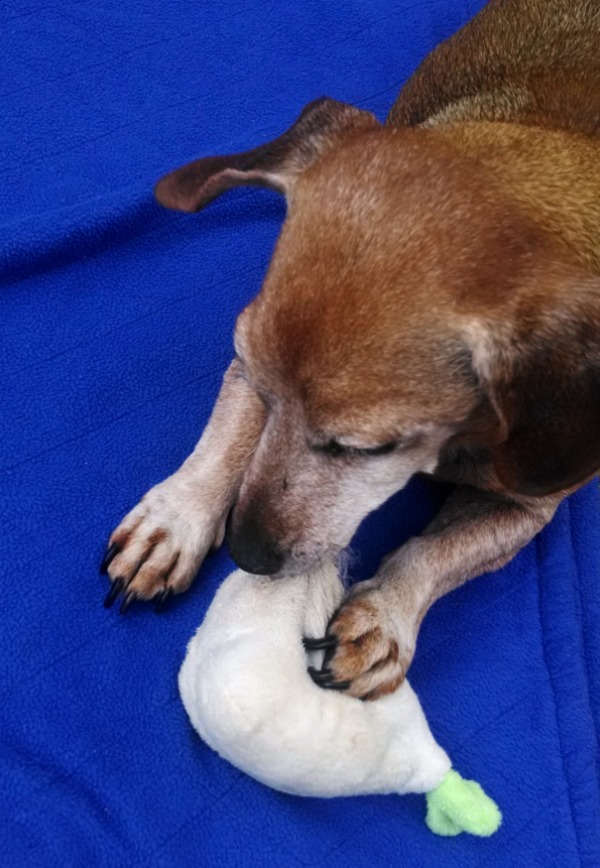 Basil loved the burger. He chewed and squeaked that garlic, and he wagged. He was happy, just being with us. I was happy he was able to be comfortable and calm at home, rather than anxious in a clinical setting. I was so happy to be able to provide that for him.

Today would be Basil’s birthday. This has been a very sad and quiet week for all of us, and today we celebrate him once again. 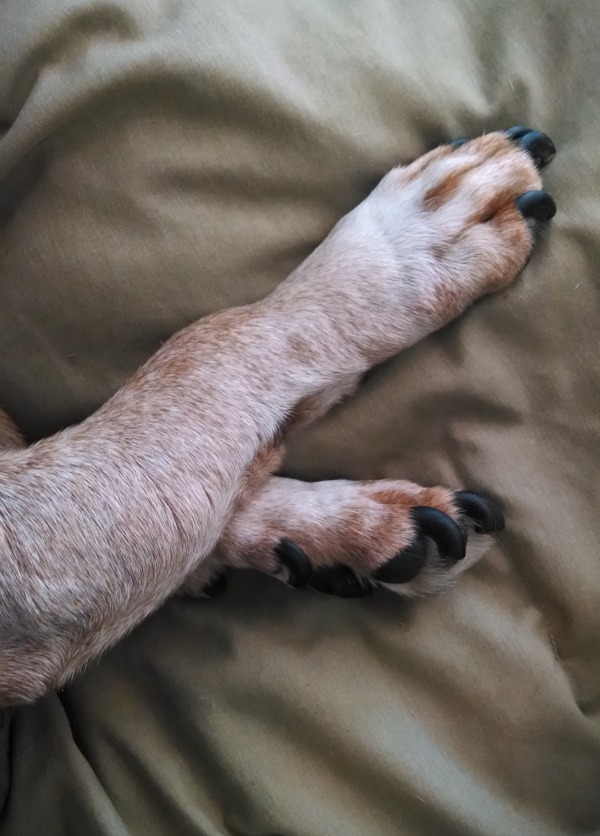 We love you, Sweet Basil Bud.

We found out recently that Basil has cancer.

I know. I cannot even talk about it.

Last week, I told Jason that when the time comes, I do not want Sweet Basil to leave us in the environment of a cold sterile vet office. I do not want Basil’s final moments to be filled with the anxious fear he has every time we go to the vet.

END_OF_DOCUMENT_TOKEN_TO_BE_REPLACED

You want to know what is simultaneously exciting and heart wrenching at once? Searching Oregon Dachshund Rescue to find my little Basil – basa a sister.

The little kielbasa has a birthday tomorrow, he turns nine. Given that Basil was a birthday gift for me when we adopted him, why not find Basil a little sister for his birthday?

Hence the excitement. The heart wrenching roller coaster comes when I see all of these little sweetie long dogs, so many needing extra love and care, all of them needing real homes. I just want to adopt them all, make up for their sad past and help them heal and trust.

There has to be a sweet little girl pup that will fit in perfectly with Basil and our family. I hope she finds us soon, just as I hope all of these pups find their perfect place soon.

We had another Happy Hour at Home recently, featuring one of my favorite easy summer appetizers – bruschetta. At the market, I cannot pass by the heirloom tomatoes stands without choosing a few, and they really make a bright and fresh bruschetta. Basil provided by mom’s garden, thanks mom!


Slice baguette, arrange on baking sheet, drizzle with olive oil. Toast breads in 325 degree oven for 5-7 minutes or until crisp. Chop tomatoes and chiffonade basil, add to a bowl. Toss with olive oil, salt and pepper. Arrange toasts on serving plate, spoon tomato basil mixture onto each toast. Drizzle balsamic over each toast.

*balsamic reduction – how to

In a well ventilated area, in a saucepan over high heat, bring balsamic vinegar to a boil (the amount you begin with will reduce to about one quarter that amount – 1 cup balsamic vinegar = 1/4 reduction). Reduce heat to simmer, stirring continually. Vinegar will thicken within several minutes, remove from heat. Allow to cool, transfer to container (preferably a squeeze bottle) and store in refrigerator.

Are you a bruschetta fan? What is your favorite easy summertime appetizer?

Have you ever adopted a pet from a shelter or rescue?

We take Basil on outings as often as we can. This weekend, he joined us at Home Depot:

He stayed home for the after hours rock show at the bookstore, though…

and I had worked a little bit (cookbook recipe testing for Allyson):

and I made several batches of these…

Have a great week!

Jason brought them, just because.

and now I’m sharing them with you – thank you all for your continued readership, friendship and support – it means more than you know.

Basil is a smart pup.

He has a touch of separation anxiety, and hates to be left alone. We have this retro style couch that sits on tall legs, and when he sees us put shoes and coats on, he slinks under the couch. We crate him when we are out, thus the couch slinking.

Sometimes I can grab his leash to take him on a short walk before I leave, and he will come running.

Yesterday he was onto me – he wouldn’t budge. Not for a walk, not even for a peanut butter spoon.

Yes, sometimes a spoon into his peanut butter jar is an effective bribe.

Yes, Basil has his own peanut butter jar. It has his name on it. He eats peanut butter out of a Kong, and sometimes double dipping happens.

He needs his own jar.

I made a great sauce for these salad rolls, using the other peanut butter jar. The one for the humans.

Spread ginger sesame peanut dressing over tempeh, sprinkle with sesame seeds. Bake at 350 for 15-20 minutes. Remove from oven and cool completely. Cut into six strips, one for each roll.

Meanwhile, prep ingredients for easy assembly – have one large round plate to roll on, one large plate with water to dip wrappers in.

To make spring roll: dip rice paper in warm water for 5 seconds*. Place on plate, crumble one tempeh strip down middle, leaving one inch on each end and 2-3 inches on each side. Layer 1/6 edamame and slaw over tempeh. Fold the one inch ends over and press down, so the rice paper sticks to itself. Turn to one long end and begin rolling tightly, folding over and rolling completely closed.

*After 5 seconds the rice paper will still feel firm – this is normal, do not soak longer. It continues to soften and is easy to work with if only soaked 5 seconds. Longer soaking may result in holes or tears in the rice paper.

Serve with ginger sesame peanut dressing as a dipping sauce. You could also drizzle it over the roll filling before rolling.

Combine all ingredients in blender at high speed. Store in refrigerator if there are leftovers.

Basil eventually came out from under the couch yesterday. After I moved it.

Many of you are asking where we stayed in Napa, or more specifically, who has the s’mores kit?

The Cottages of Napa Valley was definitely my favorite place this trip, and is right up there as one of the best I’ve ever stayed!

We were cottage number three.

Quiet and private, the cottages are charming and beautifully detailed. They think of everything, and the design elements are fun, functional and very shabby chic. I want the designer to build me a house and furnish it just like the cottage we had.

The s’mores kit, a beautiful orchid…

The bed was tall! I love tall beds.

Local chocolate left on the pillow…

Jason loves Bose. So does my dad – he’d love this detail too.

My favorite part? The jetted tub. I was in this within an hour of our arrival.

Look at the awesome bathroom sink – a double sink. I want one of these someday!

We slept with windows open for fresh air, and enjoyed the fire…

Another detail I loved? A breakfast basket is left on the porch every morning.

One morning we had the Chronicle, the next we had the New York Times…

Juice, fruits, a bag of bread and a box of pastries from Bouchon Bakery.

We love the cottages of Napa Valley…

Beautiful park like setting, outdoor seating areas, bikes to ride, and minutes away from the wineries!

I would love to make this a regular trip – we are already talking about our next one.

Restaurants and wineries up next!

Have you been to Napa? Do you like visiting wineries?